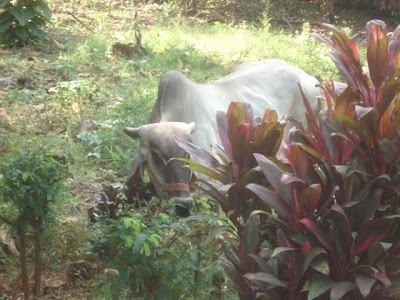 We don't live on a farm , but we have farm animals in the yard from time to time . 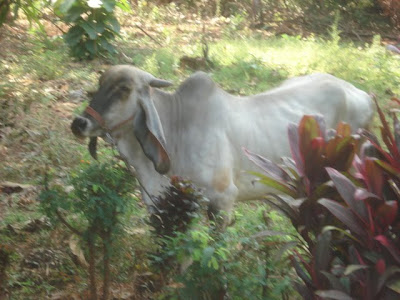 Just when I was saying to Ciejay
that I needed to go to the Farm Store to buy some fertilizer for the grass and plants , here comes the neighbor to the rescue and brings a couple of organic fertilizer producing walking machines to take care of the job for me and it's all for free, I just had to stand guard around my flowers , they like them as a appetizer, ha ha . You never know what you're going to find in your yard some days, that's what makes life here in the LOS interesting . Ever have cows grazing in your front yard??? well it's a first for us too, but it does have a side benefit, I'm just glad we have some sunshine to dry the cow dung quickly. Malcolm
Posted by Malcolm and Ciejay Burgess at 8:28 PM 7 comments: 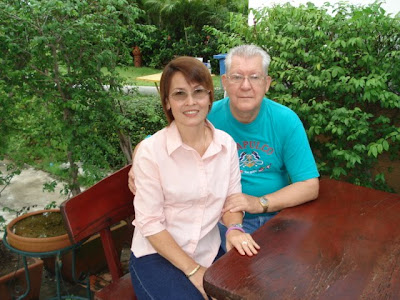 A very Merry Christmas and a special thanks to all who have took the time out of their busy lives to stop by my blog and give a read and enjoy the pictures and little stories about Ciejay and My life here in Wang Pho
I'm excited about the new year ahead and hope for lots of adventures and stuff to share with you as we find the time and money to do a little traveling around Thailand to places we haven't seen yet , but are on our list of "to see places" . I hope we get to check a lot of them off. As I have said many times in the past we are still Retired in Thailand and Loving It 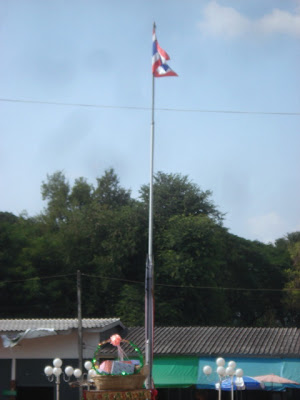 New Year to you and yours ,in your City , Town , or Village or wherever you heart finds you, and also a
healthy and blessed 2015

Posted by Malcolm and Ciejay Burgess at 4:27 AM 10 comments: 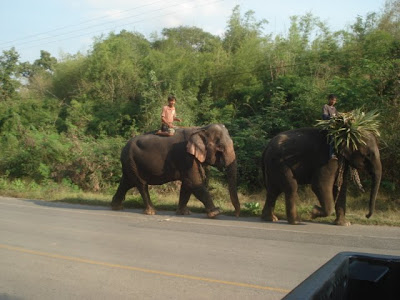 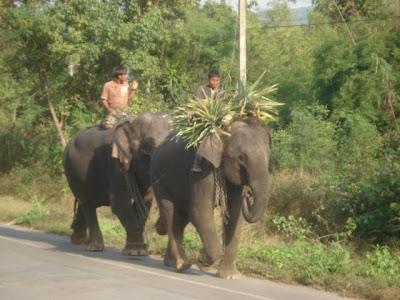 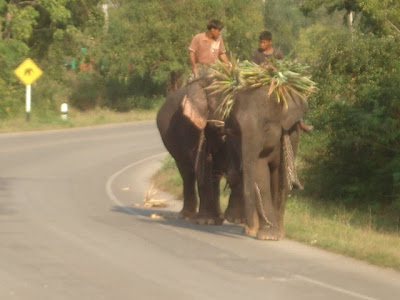 One of the great things about taking a day trip in the LOS is that you never know what you're going to see just around the next curve or bend in the road . Such a day was yesterday , Ciejay and me were doing the wine business and decided to take the long way home it was such a pretty day , as we came around a curve there they were the (I think ) most beautiful and breath taking creatures in the whole world two elephants with their Manhots going to the river for a bath and swim and the men had a little sugar cane for a snack for the elephants after their bath , I get to see lots of elephants here in Thailand , BUT I always have to stop and take a good look and get a picture if possible . I am always amazed that something that big can be so gentle. I hope you enjoy seeing them as much as I do . Where else could you have such a unexpected thrill as this but here in the LOS , I guess thats just another good reason we're Retired in Thailand and Loving It. Malcolm
Posted by Malcolm and Ciejay Burgess at 10:45 PM 1 comment:

Tiger in the making 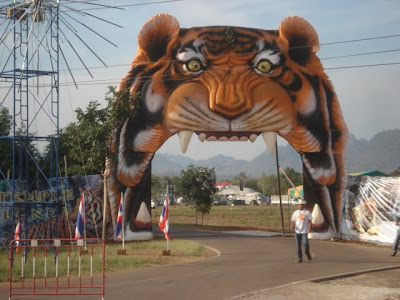 Just went by today December 31 and they had added this huge Tiger face over the entrance to what they are going to call Tigerland, and it looked like they were having a private New Years party , we couldn't go in . Malcolm 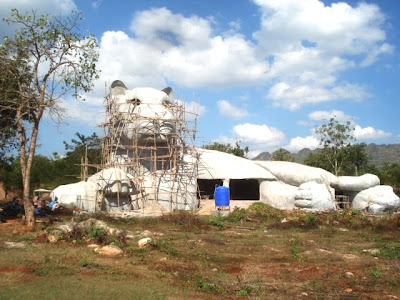 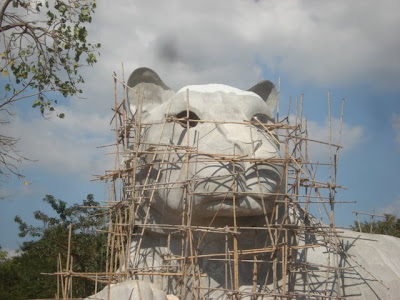 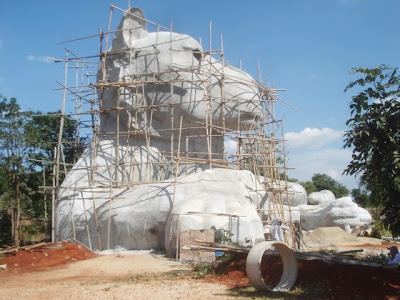 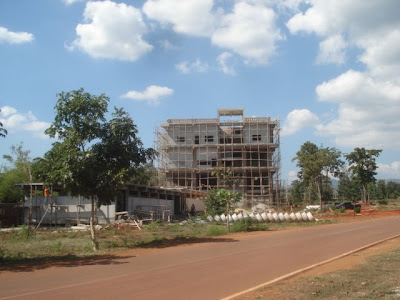 One thing for sure , when you are driving around the country side here in the LOS, you never know what you are going to see. This was the case just the other day on the way home from Kanchanaburi, I looked off to the left and down a road that I had not noticed before and saw that something big was being built out of concrete , sooo I had to turn around and take a look . To my surprise there in the woods was being made out of concrete the biggest Tiger I had ever seen , only a few workers were around sooo could not get any information , but from what I can guess ,it looks like a hotel being built and the huge Tiger will be some kind of attraction , I plan on stopping by again soon for more pictures and hopefully ,be able to see someone who can tell me whats going on here . This tiger is huge and I'm sure when it is finished and painted , it will be a must see for lots of tourist. Have you ever seen a tiger this big , I've nicknamed him "Tony "after one of my favorite tigers. Malcolm
Posted by Malcolm and Ciejay Burgess at 5:37 AM 5 comments: 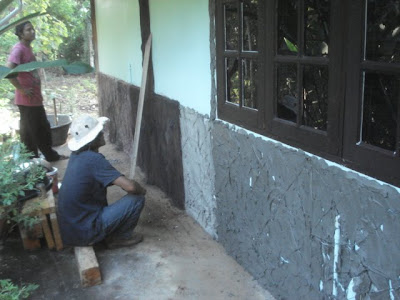 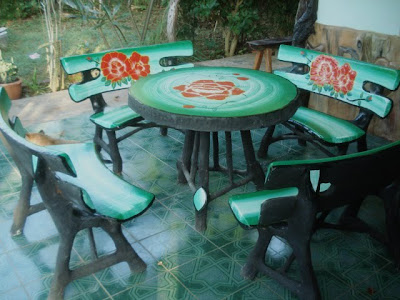 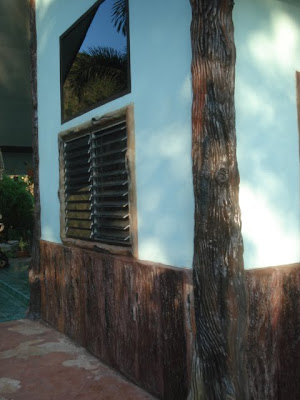 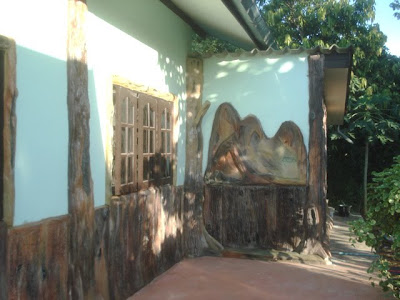 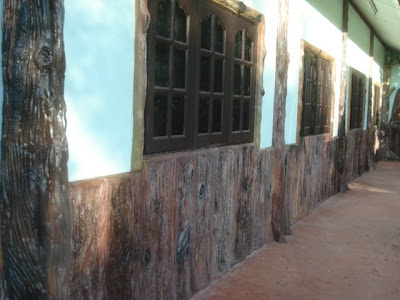 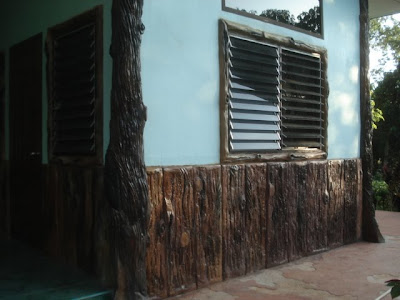 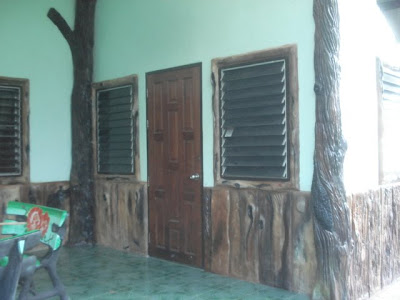 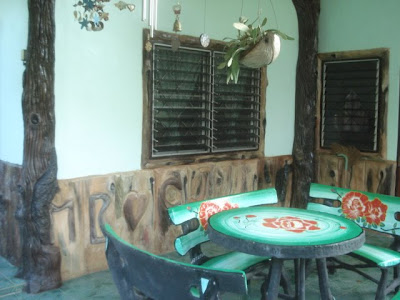 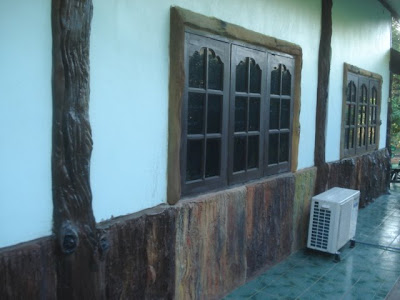 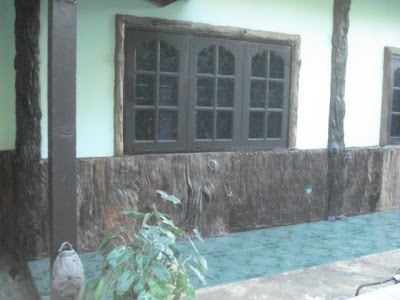 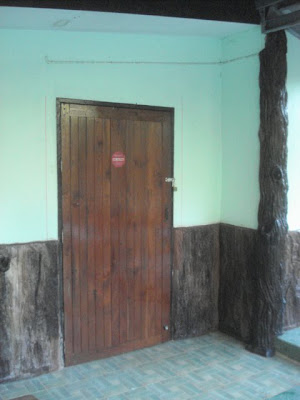 Well , today I learned that the decorating we are doing on the house is actually a lost art and is starting to be revived by some folks all over the world old pieces of Faux Bois are quite collectiable and sought after by collectors , soooo I guess our place will be a collector item for our grand-kids one of these days , who would have thought , ha ha , I'm posting a few up-date pictures of the work and it should be finished in a few days and then we will paint the green part of the house a light tan color , should look good. Hope you enjoy the pictures and the story from the web.

This school of art goes back as far as "art" itself. From our very beginnings, artists have been fascinated with the infinite variety of shapes, forms and textures that Mother Nature expresses in trees and their wood. And while the French are indeed to be credited with giving this art a name, there are examples to be found that far predate the existence of France as a nation.

The modern schools of this art today encompass two principle branches. One employed by highly skilled wood finishers that involves itself with making "lesser" woods such as pine, have the appearance of a "finer" or more exotic wood. The other branch creates three dimensional representations of wood and wooden objects by applying various cement-based mixtures onto a steel framework or "armature", and sculpting it to mimic the real material.

The subject of this brief essay is the three dimensional variety,
also known as Ferrocement Faux Bois.

Ferrocement Faux Bois is a very popular and much sought after category among serious antique collectors. One of the most notable of whom is Martha Stewart, who collects antique as well as modern works executed by the very few remaining artisans still practicing this craft. Sadly, there are only a handful of artisans alive today who are capable of executing Faux Bois at the masterwork level.

The most familiar works are those imported from Europe by antique dealers specializing in garden art. Typically they have what I refer to as a "French" finish composed of a gray, lightly sanded mortar mixture of Portland cement and sand. What few people today, including many collectors, do not realize, is that the vast majority of these pieces were at one time painted. Often quite garishly. Thankfully, nearly all of the paint has succumbed to the nature of the concrete and fallen off, leaving only a faded and aged patina. Many of these works are crude. Others more convincing in their detail. Most of the better pieces were constructed from about 1880 to WWII, but there were a few very capable craftsmen still producing an utterly amazing body of work well into the 1950's...right here in America.

Today, the very best of those major works rightfully represent an entire category on the National Register of Historic Places. And there is a serious movement taking place to add many more and restore them to the former glory that as much as a century of neglect has all but erased in many cases.

The process of creating these works is at once complex, technically demanding and extraordinarily labor intensive. It involves first building a steel framework (referred to by sculptors as an "armature"), securing and forming metal mesh known as "lath", then building up multiple layers of concrete, mortar and often pure cement paste. All the while, shaping, sculpting and detailing the material as it hardens. Once the process of adding cement-based media begins...there is no stopping. The material will not wait and absolutely must be worked from beginning to end. Complex and highly detailed works can often require an artist to work non-stop for 12 to 24 hours to achieve many specific effects. Little wonder it is less than popular with today's generation of artists. But there are rewards for the few who invest themselves in this demanding art, as well as the buyers of these rare works. Because the time and effort put into a quality piece is also reflected in its' longevity. Properly formulated and skillfully placed modern cement formulations can endure exposure to the elements for an estimated fifty-thousand years. How's that for "heirloom".

And while works of this calibre are obviously rare and understandably expensive, they can still be found or commissioned by a properly skilled sculptor
Posted by Malcolm and Ciejay Burgess at 1:42 AM 2 comments:

Posted by Malcolm and Ciejay Burgess at 6:49 AM 3 comments: