Ciejay and me got up early Sunday morning and decided to take a day trip , it wasn't planned , But  the trip was a water related day, We first went about 100 kl. up the road (323) to the town of Tong Pa Pung and went to the huge hydro-electric Dam and lake , from there we went to the Hindad Hot Spring , was this ever a great place, It's well maintained and they have 3 pools to soak in  Hot ,Hotter, and Hottest  and I do mean hot, but the great thing about it is the cold creek from the mountains that runs along side of the hot pools, after a time in the hot you can just slide over into the cold and what a refreshing  feel that is , I'm in whole body and Ciejay is just a feet soaker. We had a great time there and then we were hungry from all the relaxing and found this great little road side restaurant and had the best Pad Thai  I have ever had , we'll be going back for more . 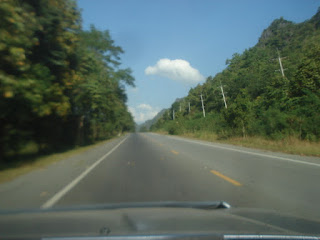 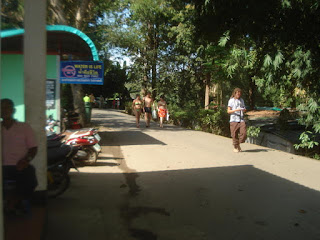 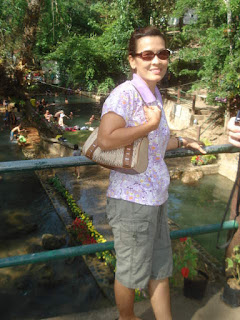 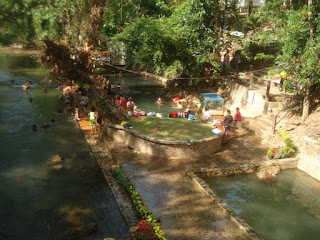 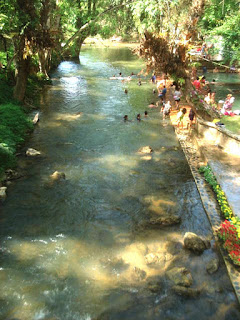 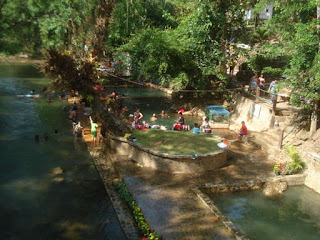 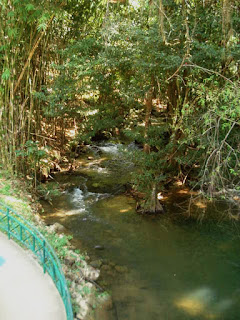 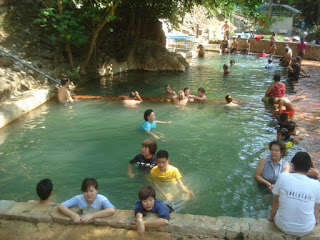 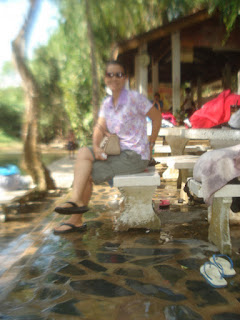 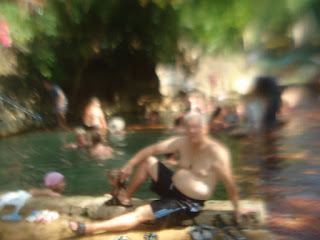 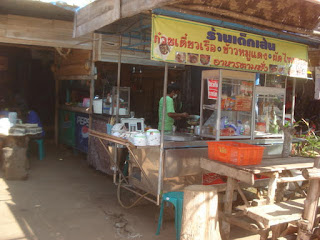 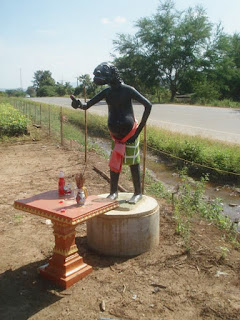 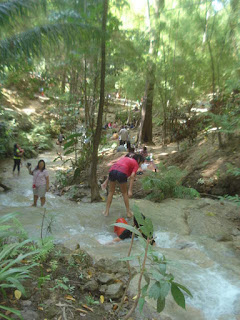 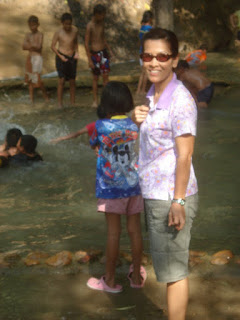 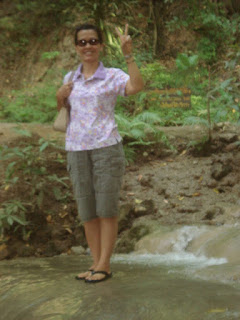 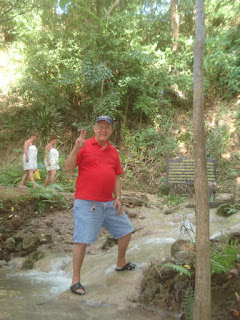 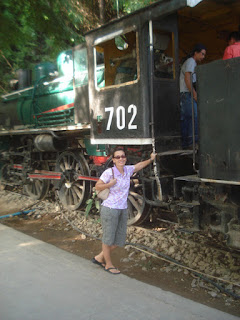 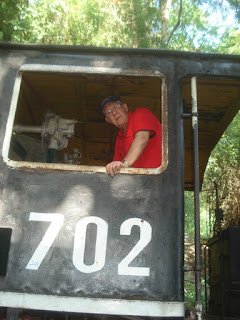 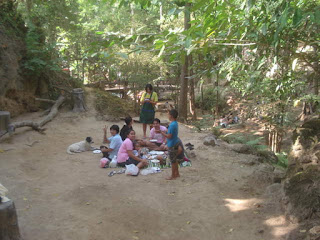 We then headed back toward home and when we got to Sai Yok Noi ,  Ciejay said "we haven't been to the water fall in quite a while  ,lets go there " so we stopped in Nom Tok and headed up the trail to the water fall . The place was packed ,and lots of folks were pic-nicking and playing in the water , kids everywhere  and having a great time , we soaked our feet in the small falls and just sit and "people watched" for a while , and enjoyed the cool breeze coming off the water . We did a little hiking up the trail to the place where they have one of the old trains parked and you can climb in and pretend you're the engineer , you know me  ,up I went , . After that we came back down the trail to the gift and food shops and we did our share of helping out the local economy, we got a back seat  full of snacks for us and our neighbors and , the one special thing I love is the fresh dried pork that has been sun dried and then deep fried , a lot like the beef jerky I loved in America. It's one of my favorite afternoon snacks , I eat it with sticky rice, it's to kill for . After spending all my money on snacks (that I really don't need to be eating )  we headed home. We had a great day and I was able to take a few pictures before my Sony Cyber -Shot gave up the ghost , I got 5 really good years out of it , and it was always in my pocket  and had fallen out many times and got wet and lots of other abuse, So it was about time , and YES  I'll buy another  Cyber -Shot.
Hope you enjoy  the day trip post and the pictures.
Thailand is a great place to live and lots of fun stuff to see and do , and all in your "own back yard ", so to speak . I guess that's just another reason why I'm  "Retired in Thailand and Loving It."                                                                                        Malcolm
Posted by Malcolm and Ciejay Burgess at 7:36 AM 6 comments:

I know I haven't said much about the flooding in Thailand , BUT , my computer has been having problems and we've been busy working in the yard as the rainy season has come to a end here in our little part of Thailand .
But--  that cannot be said of about 1/3rd of the provinces in Thailand many have been flooded with water up to 2 and 3  feet and some places even higher , and with it all happening right in the middle of the rainy season and with the ground already being saturated with the rain , the water just are not going down in many places and will be around for quite a while.
Our Thai. daughter Nu and husband A and grandson Nicky boy's home was flooded to the first floor in Nakon Sawan and they had to flee up North to their relatives and are building a small home there , as it will be in reality months before things in Thailand will be back to normal ,, they make a trip to their home every week to check on things and they have someone who is watching the place for them ,by staying on the second floor and guarding things , when in time like these , as almost everywhere , there are terrible people that take advantage of other folks tragedies and are going around to homes where there is no one staying and just helping themselves to what ever is there. In fact I would say that for some places it will be years and some will never be the same , even as I type this it was announced on the news that lots of water is now pouring into the center of the business and market districts of Bangkok today.
Our little village is full and I mean full  of folks who have fled Bangkok and  are living with relatives here or they are renting every guest house and empty room for a place to stay  with their families and pets  some expect to be here for months. We have several homes on our street that have been rented out and they are several families staying in each one , people helping people and Wang Pho is doing it's best to help all we can. 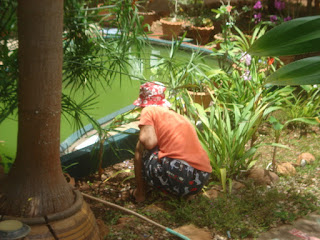 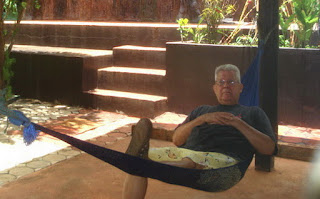 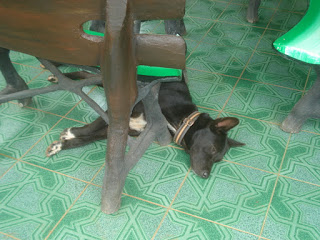 We were in Kanchanaburi a couple days ago for my Dr.'s app. and they say that there are thousands of folks that have fled to the city  of Kanchanaburi as some hospital in Bangkok have been closed and they ( the sick) have come to our Prov. hospital to get treatment , when Ciejay got there it was packed, thankful she was already scheduled and was only there for 4 hours .Afterwords we went across the street to Tesco and you could not hardly find a place to park it was sooo busy, they are trying , but a lot of shelves were empty and some prices had gone way up.They have been asked by our PM not to raise prices , But many of their suppliers are in the flooded city of BKK and have only limited supplies , and their factories are being closed , because of the flooding they are charging more and it is being pasted on to the consumers This months groceries probably cost us at least $50 more US dollars  than last month and will probably go up even more as the waters will be around in most places for a while .
As the title says  we here in Wang Pho are high and dry and our folks are doing all we can to help those effected by the flooding .
Take care and remember to pray for the folks and not only them but thousands of pets have been left behind and many are starving and hungry too .  This kind of stuff effects the hold of humanity and the animal kingdom as well.  If you have any questions about the flooding or if you want to know how you can help  E-mail me and I'll point you to the RIGHT place.                                                            Malcolm
Posted by Malcolm and Ciejay Burgess at 10:09 PM 8 comments: