They say that Thailand is the freshwater fishing capital of the world , and from all I see and hear from the fisherman that come here to fish, they all agree .

I've been trying to catch one of these fish for a while and have always missed the hook-up or broke my line , well yesterday at a catch and release pond I hooked into one and was lucky enough to land him , take a few pictures and let him or her go back for another fishermans catch of the day . Now if I ever get up to the Mekong Delta  up north I might just try for one of those world record one .lol

This info came from the www. hope you enjoy the read  as much as I did and I really enjoyed the catch .

It's official! The new world record holder for the biggest freshwater fish is the Giant Mekong catfish (Pangasius gigas). The biggest one ever captured and measured was caught in Thailand in May of 2005. It was 9 feet long and weighed 646 pounds.

The fish in the photo was captured by some fisherman where the species is considered endangered, but can still be caught with special permits. The fish was turned in to the Department of Fisheries where the eggs and sperm are collected from these rare giants and harvested for a captive breeding program to keep the species alive.
This giant catfish inhabits the waters of the Mekong River in China, which flows southward into Southeast Asia. This fish is found as far south as Cambodia and Thailand where it is known as Pla Buk, which means simply "huge fish".The dimensions of these catfish are very impressive, with the largest supposedly growing up to 10ft/3m and weighing up to 660lbs/300kg.
Scientists have recently discovered something amazing about the Giant Mekong catfish; they live out part of their lives at sea. Most people have the impression of catfish as slow, lumbering bottom-feeders, but it turns out that the migration routes of these catfish rival those of the better known salmon. Scientists have recorded Pangasius gigas traveling as much as 600 miles (1000 km) inland from the south China sea up the Mekong River to spawn. 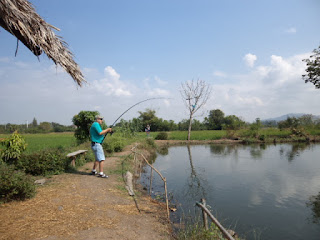 I hook into a big one  (for this area) 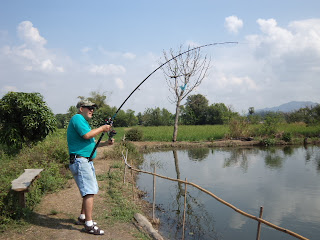 He or She puts up a good fight 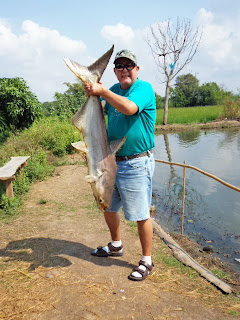 But in the end after about 20 min. I land  the Gaint Mekong Catfish   yee haaa !!!!  take a few quick pictures and back you go for another days fun . Mine weighted 17 kilo or 37 lbs.  not quite a world record , but a great catch .
Posted by Malcolm and Ciejay Burgess at 8:36 PM 4 comments:

Shave and a haircut two bits

By Dr. Gifford Jones Sunday, December 16, 2007 “Would you like a free massage as a holiday present after your haircut, doctor?” the owner of Elizabeth Milan’s salon in Toronto’s Royal York Hotel asked me. It had been a hard day seeing patients and maybe I looked a trifle haggard. But whatever the reason, being of Scottish heritage, the free part appealed to me. So I said, “Why not?” (from a article on the www) When we get a haircut, with a little bit of therapy thrown in, was it any better than a standard haircut???? I use to think that a haircut was just that a haircut, but in the back of my mind ,I (even growing up) always knew that it made me feel good , like my battries had been recharged,made me feel good about myself, and for sure made me look a lot better, when I looked in the mirror,that the barber always held up and said "hows that look ". Now that I have grown older and a lot wiser,(ha ha ) I realize that everytime I got a haircut and as I got older a shave , that it made me feel better not only physically, but that it was also therapy ,for my whole body as well, I never knew it as such then, the rhythm of the scissors clicking against the comb , the noise of the electric clippers and the news of what was happening around town , plus a opinion on a lot of subjects, and then, to just sit there in the chair or lay back for my shave, and close my eyes and just let my head clear and let my thoughts wonder to who knows where, and forget about the world ,and all it's cares and problems for just a few moments,I now realize ,that was more than a haicut and shave it was therapy for my soul and I never even reconized it as such ,and then to hear the words NEXT and all of a sudden I'm back in the real world again,and all that for three bits, and I walk out of the barbershop feeling like a new man. Here in Thailand I have found a skilled barber lady and I have to say one of the best therapist in the whole country, she is a excellent barber and has the hands of a angel when she gives the scalp massage and little shoulder and back rub that she always throws in for free, and sends me on my way feeling like a new man ( and again all that for 30 baht) , ready to take on whatever RETIREMENT throws at me the rest of the day, and of course theres always the HAMMOCK. How about you ? do you enjoy the therapy that comes with your haircut ? and if you're not then I say it's time to find a new barber ,where you can sit down close your eyes and relax and let your mind clear and and your worries and cares of the day ,fly away for a moment or two, and get your emotional battery charged ,and you get to sit in a chair and not lay on a couch. Malcolm

Posted by Malcolm and Ciejay Burgess at 6:02 PM 11 comments: 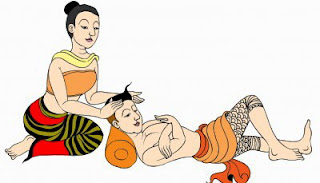 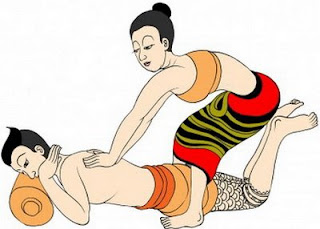 One of the many joys about living in Thailand for me is my discovery of the famous Thai massage . Monday is the highlight of my week as I have a lady who comes to the house at 10 o'clock am every Monday and gives me a massage that always gets me started on my week with a" spring in my step and a song on my lips" as the old saying goes. I use to just go with a two hour classic Thai massage, but now that I am really into it for my health and since of well being ,I have started to have a one hour traditional Thai massage ,and I told her from the start not to jerk me apart and I want no pain, and after that I have a cup of coffee and then I'm ready for my wonderful one hour herbal oil massage , and I can say that it is to kill for , her hands are like Angel wings gliding over my body and and the strengh from her hands seem to be absorbed by my body as it is rejuvenated and when it is all over ,rather than "feeling like a wet noodle" so to speak, I feel like a dead battery that has been hooked up to a quick charger and I ready to take on whatever up's and downs life has to throw at me for the rest of the week.

The Thai massage uses both the palm and thumb,to concentrate on the pressure points of your whole body. This type of massage includes some streching,to reduce fatigue and to relax tired and tight muscles, and also to improve the blood circulation,this type of massage can be very helpful and relaxing for those older folks like myself and and also for anyone that is having trouble with poor circulation of blood to their legs and feet.

"Thai Massage ,one of the hot "new" massages offered by most spas,was actually developed by the Buddhist monks in thailand as a healing modality 2,500 years ago.It uses passive streching and gentlepressure along the body's lines to increase flexibilty,relive muscle and joint tension and balance the body's energy systems.It is both deeply relaxing and energizing."( quote from a article by Anitra Brown,about .com )

Thai massage has its roots and beginnings in a spiritual tradition, and its puropse is to heal a person physically,emotionally and spiritually.It should not be confused with sensual, and Swedish massage.

Hope you enjoyed this post and that if you have never tryed a traditional Thai massage before that you give it a try, I think you will be pleasantly surprise at they way your body will feel afterward, and remember ,if you want,that you tell the therapist that you want no pain ,at least not the first couple of times , thats the way I did it and loved it .Just a side note ,I had a friend who went for a Thai massage and he laid down on the mat and just went with the flow, the next day he ,was so sore he couldn't hardly get out of bed . ha ha . Malcolm

Posted by Malcolm and Ciejay Burgess at 3:25 AM 22 comments: 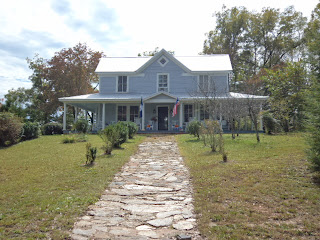 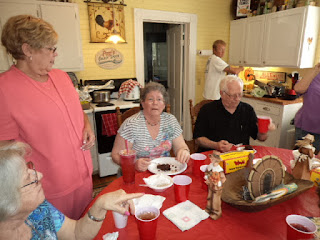 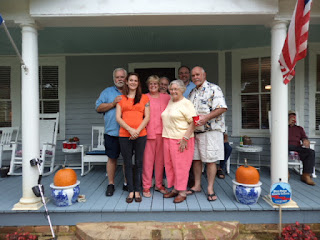 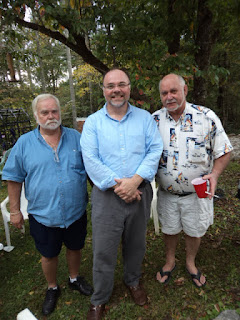 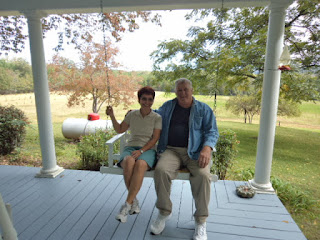 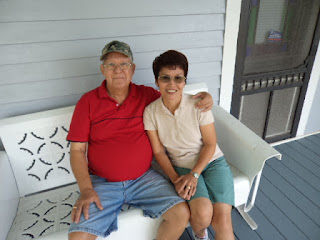 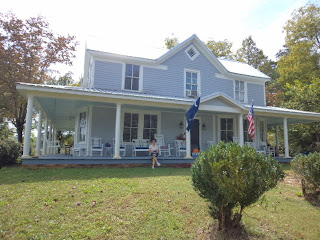 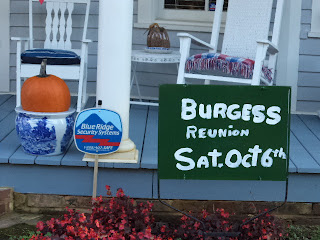 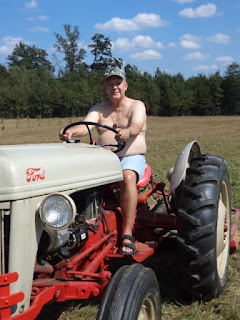 I know, it's been a while , but with all the excitement of Christmas and New Years , we've been busy , and we lost our beloved boy (dog) Sabu over the holidays , sooo that was a hard time too. Things are getting back to normal now . This will be the last post of our trip to the USA last year , it was a great time with friends and family and we still talk about all the folks and food and fun we had . Hope you enjoyed the little post and pictures . This next trip was a trip from Tenn. to S.C. for a little mini "Burgess" family reunion in Marietta , S. C. It took place at the old restored home place of Marietta and Oren Moore , what wonderful host they were and the place is like a step back in time , every room has a different theme to do with their family and everything is really old , but looks new, a wonderful restoration job and labor of love by Oren (Benny ) Moore for his sweet wife .Lots of Burgess's and their families showed up from all over and it was a wonderful time ,Food was brought by all and I ate till I thought I'd pop, lol. I'll never forget this get together . Took a lot of pictures of the place and folks and will post a few  , hope you enjoy.

The next post and afterwards will be back to life in Thailand and of our life here in Wang Pho .
Posted by Malcolm and Ciejay Burgess at 10:24 PM 4 comments: