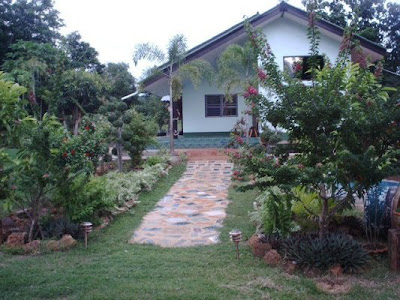 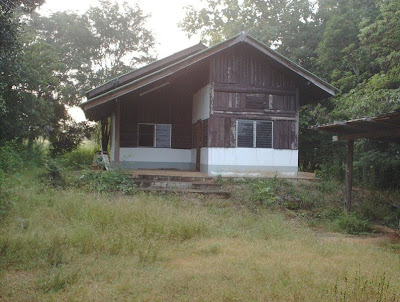 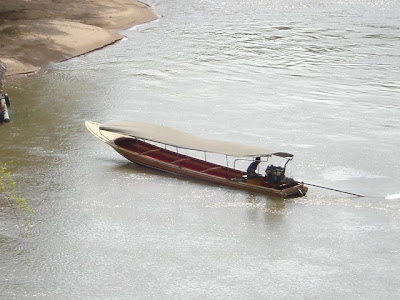 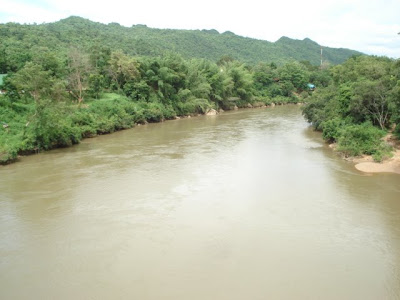 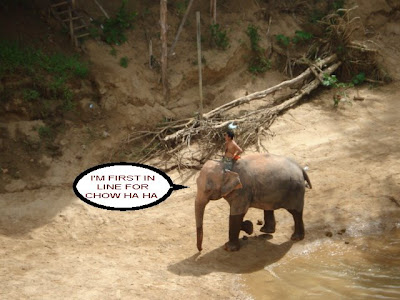 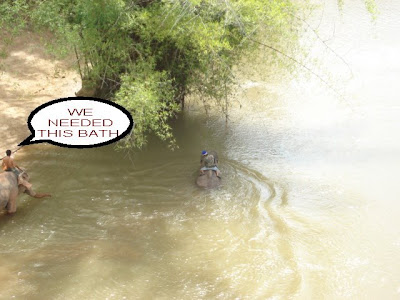 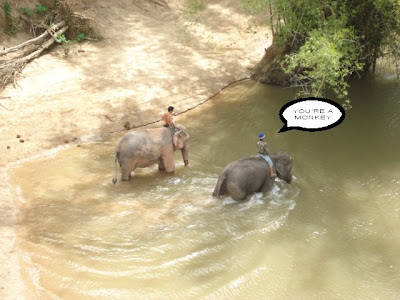 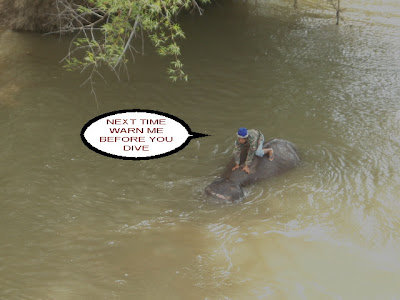 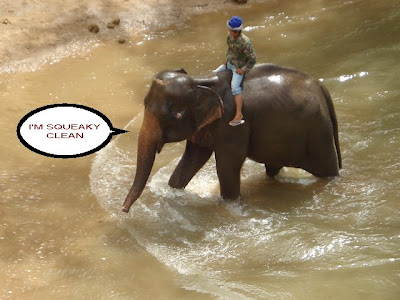 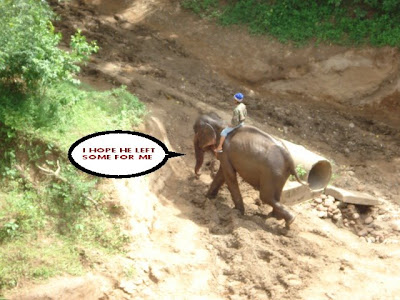 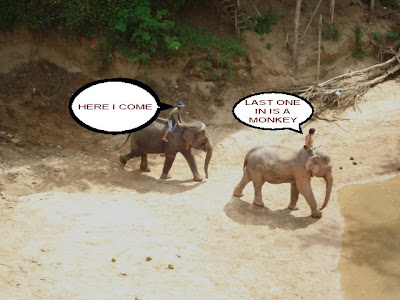 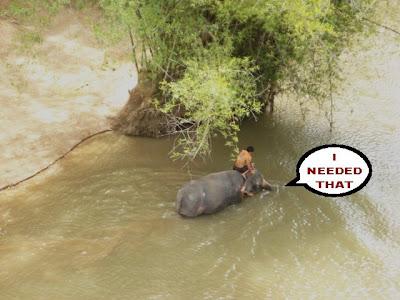 Today ,I thought being it was not raining ,it would be a good day to take a ride on the Honda as I had'nt rode it in a week or so ,because of all the rain , and it's good to ride them every so often to keep things in shape and them running smooth, and besides all that, I miss my weekly trips to wherever the road leads. today I already had my mind set on going to Sai Yok Elephant Park , because I had heard that they had a new baby born last week and I wanted to get some pictures for my grand-daughter in Oregon , she takes my pictures on a disc that her Dad will make for her for Show and Tell.All the kids in her class love it when she brings pictures of Thailand to school with her , and her teacher has e-mailed me and thanked me for them too.But before I got to the park as I started across the bridge that goes over the Famous River Kwai , I looked over and saw two of the trainers racing their elephants down the hill toward the river for their evening bath, and my attention then turned to this photo opp and I thought you might like it too. You know if you have read any of my past post that I love elephants and every chance I get I try to get down to the camp to see them and and admire them as the wonderful,intellegent and kind animal they are , and let me asure you that they never forget you, if you have made a friend with them and their trainers.Hope you enjoy the pictures .Malcolm
Posted by Malcolm and Ciejay Burgess at 11:05 AM No comments:

HERBS and SPICES, AND, MEDICINE IN OUR OWN BACKYARD 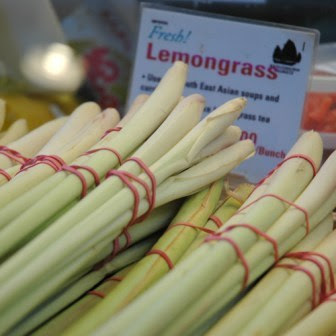 HERE STEMS ARE ALL CLEANED AND READY FOR THE SOUP POT 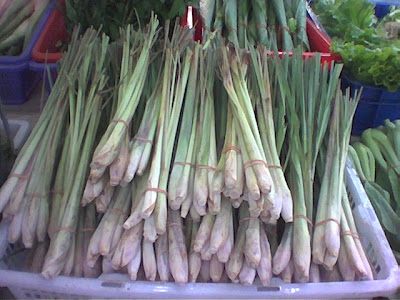 READY TO TAKE TO THE MARKET,OR TO SELL WHOLESALE TO THE VENDORS AT THE MARKET ,OR TO SEND TO BANGKOK OR KANCHANABURI, TO THE MANY THAI RESTAURANTS FOR THEIR KITCHENS. 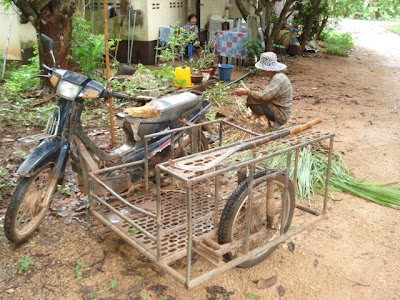 OTT: CLEANING AND TRIMMING THE LEMON GRASS, ONLY THE STEMS ARE USED FOR THE SOUPS, AS A SEASONING AND THE LEAVES THEY CAN BOIL DOWN FOR LEMON OIL. 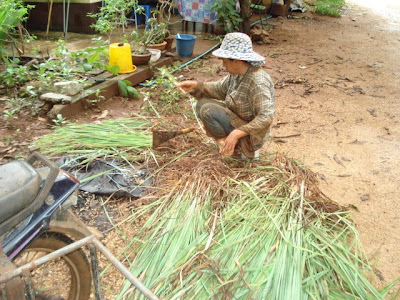 DIRTY WORK , BUT, A VERY GOOD MONEY CROP FOR OTT AND HER FAMILY 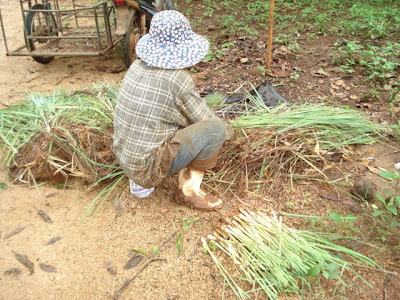 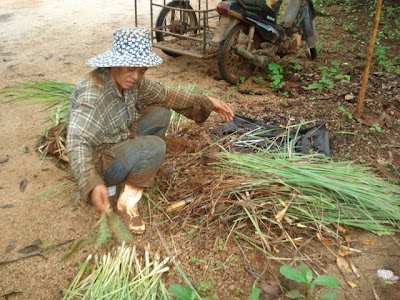 THE STEMS IN ONE PILE AND THE LEAVES IN ANOTHER, GETTING READY FOR THE WASHING ,THAT WILL CLEAN THEM BEFORE TAKING TO THE MARKET TO SELL.
The other day I saw my neighbor,Ott going down the road with a load of grass in the side car of her scooter, and being one ,not to miss a good photo shot ,went to investigate the scene. It was grass, but a special kind of grass, called Lemon Grass. I thought to myself ,I'll share these pictures and do a little informative (not thesis) post about Lemon Grass and it's many uses around the world and here in Thailand SOOOOO here goes.
Lemon Grass is a native to India, It is used as a herb in Asian cooking,it has a citrus flavor,it can be dried or powered or used fresh in many Asian dishes . No tum Yum soup would be complete without a few chopped up pieces of lemon Grass put in the water along with many other kinds of veggies and meats and fishes,for that all important lemony taste (not to be eaten but to flavor only) that makes Tum Yum sooooo good .
Lemon Grass is also used as a pesticide, Ciejay always pulls off a leaf and crushes it in her hand and rubs it on her arms and legs ,when she goes out to work in the garden or to pull weeds around the flower beds , to protect her skin, and to keep the mosquitos from biting her while outside, when we eat outside in the gazebo some evenings, we burn candles that have been made with lemon grass oil to keep them away too, seems to work ok.
Something I didn't know is that Lemon Grass is used as a preservative to put on ancient manuscripts to keep them fluidity and to keep them from getting brittle it has a hydrophobic nature and keeps the manuscripts dry ,so that the text is not lost to decay due to humidity.
When we bought our home Thailand and I made a couple of the tables we use in our home from wood that we removed from the sides of the building, and replaced with concrete, I used lemon oil as a preservative to protect the wood againts termites, and also when rubbed in very good and polished after it drys , leaves a beautiful glossy finish.
Lemon grass also has a lot of medicinal properties and is used extensively in ancient Indian medicines,it is supposed to help with relieving cough and nasal congestion .Ciejay says that tea made with Lemon Grass is good for stomach problems too.Also she said you can shampoo your hair wit the oil ,to get rid of dandruff.
Most of the information and some of the pictures came from the Wikipedia Encyclopedia. Hope you enjoy.
It is easy to grow ,in fact we have several stands of it growing out our back door , we took the ends of the pplants we bought in the market for soup and put them in a cup of water till roots appeared and then I planted them in the yard and Kazam in a few months we had our own stand of lemon grass , it also grows well in a pot and makes a great house plant. Malcolm
Posted by Malcolm and Ciejay Burgess at 10:15 PM 6 comments:

AM I EVER GLAD TO SEE YOU 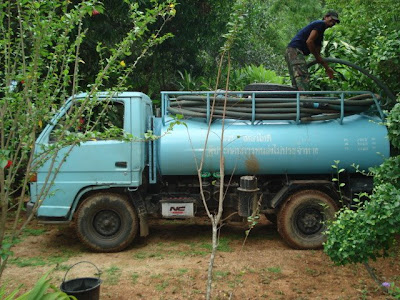 I'm sure you know what this truck and it's driver do for a living ,I call it the s--t sucker and Ciejay gives me a dirty look and tells me to be sweet, and then, I remember that the real name for them is the Honey Wagon. It's not that I am really glad to see them , but there are certain times after not seeing him for a couple months , when the wind is blowing just right,up the road and past the neighbors house ,that I can tell it's time for the s--t sucker to do his thing. Most of us in Thailad are not on a sewer system, so in it's place we dig a hole about four foot deep and put in a concrete coulvert with a lid and a small hole in the lid for the hose to pump the honey out, they charge about 200 baht for this service , and I got smart and put in a double size one soooo they charge me 400 baht , but the good part of it is I don't need to have mine pumped but only twice a year. My neighbors have the small ones and they need them pumped about every two months, and some try to go as long as they can to save money and thats when the tell,tell smell comes blowing up the hill to the farangs house and Ciejay calls the s--t sucker and tells him to come up our road and start blowing his horn , to get the neighbors attention and most of the time it works . Since we live in a small village and most of the homes are really old , the folks just run their gray and sometimes other water out back of their houses into a ditch and this not only stinks but it is a perfect breding place for the mosquitos, when we remodeled our place we put in two 500 gal concrete colverts in the ground for the gray water and also put in a drain field by removing a lot of the top soil and putting in a load of gravel and then covering it back up works great and I showed all our neighbors what we did and they all except one had a gray water tank buried and put in a small drain field , and it really keeps the populatiom of mosquitos down, and we went around and gathered up all the old tires and hauled them off(you know the Thais just throw them out back or put them around their plants (mosquito heaven).I even bought a few of them the decorative bricks to replace the tires , I have to say I have never been pushey for my neighbors to clean their yards and pick up and haul off , but as I cleaned out all the stuff left by the former owners and cleaning up the yard and sides of our street (dirt road) , they all begain to do the same and what a difference ,in how our small neighborhood looks and smells ,today, as opposed to four years ago.I know you've heard the ole saying (monkey see monkey do )not calling anybody a monkey here ,just using the saying . and it works better than trying to change the way they do things and how they keep their yards and the street looking . Amazing ,when we painted our house the next thing we saw ,was they all painted their homes to. I love my neighbors and I think they like me a little too. Malcolm ---- And it smells a lot better in our neighbor hood , until it's time for the s--t sucker truck to come and "clear the air"so to speak. Looks like I started rambling on there for a little , but thats what happens when a ex-preacher trys to tell a story. "forgive please."
Posted by Malcolm and Ciejay Burgess at 12:11 PM 6 comments: