MERRY CHRISTMAS and a HAPPY NEW YEAR TO ALL

This has been a great year, very busy , but all in all a great year. Hope all is well with all of the readers of my little blog.  Sorry I haven't posted as much as I would have wanted to , BUTTT Ciejay's honey do list are getting bigger all the time , and some days my get up and go seems to have got up and gone , soooo I find myself  when ever the opportunity comes my way,I jump in the hammock for a quick power nap.
Here's wishing you a very Merry Christmas and a Happy New Year too, and as they say in Thailand ---"rich ,rich, lucky lucky,happy happy".
Posted by Malcolm and Ciejay Burgess at 5:52 AM 13 comments: 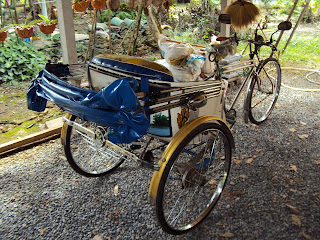 This is the before --just as he bought it 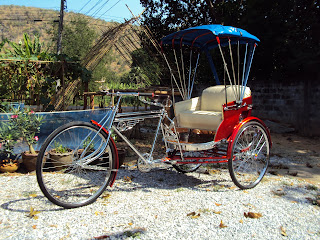 And this is the after  ---3 months of hard work
My friend Jerry has been for the last few months been busy restoring a old and I mean old Samlor( a bicycle with a passenger seat.  I'll let him tell the story , I think he did a great job and lots of hard work and love went into this project , I went by every week to check on progress and was always amazed at the work he did little by little .Hope you enjoy the story and pictures and if you leave a comment I'll be sure he see's them. Malcolm
Just to give you all a brief description on what a samlor is and a little history about it before I start telling you about the restoration:

A samlor is a three wheel bicycle with a seat behind the driver in which to carry passengers. It was one of the first forms of public taxi service in Thailand. The samlors were first built in the northeast of Thailand in Nakhon Ratchasima in 1933 and quickly spread throughout Thailand as a popular mode of transportation. Presently in Thailand due to modern day traffic such as car taxis, buses and millions of personal cars and trucks crowding the highways, the slow samlor is just getting in the way and have been banned inside some cities and will surely become a thing of the past in 10-20 years. Some parts of the country still allow samlors to operate on the backstreets but with the loss of income to samlor drivers, they will be forced to change to other modes of travel. Tourists coming to Thailand have always looked forward to a ride in a samlor just to experience a little of part of Thai culture. So after being in Thailand for 10 years, I decided to

restore a piece of Thai history in hopes that some young people that have never seen a samlor will be able to experience a bit of their own culture after their grandparents and myself are gone.

I have taken a few before and after pictures of the samlor and wish that I had taken more especially when it came time to put it back together. I first want to say that this samlor that I purchased was at least 30 years old and that the old Thai man that sold it said he just got to old to peddle it and had bought a motorcycle with a side cart for his taxi business. I disassembled the entire samlor and started to check, repair, replace and restore everything as best as I could. I quickly discovered that parts are hard to find because all the companies that made samlors went out of business several years ago and there are very few shops in the country that still repair samlors with remaining parts from years past. It won't be long until it will be impossible to find parts. It was a real experience trying to explain to shop owners which parts that I was looking for when they were not expecting a foreigner to be fixing up an old samlor. Most people thought I was out of my mind, but I already knew that. I will try to explain a little about each picture the best that I can and hopefully you will understand. I will use the picture number in my draft here and hope that they will match up in order when I attach the photos to this email. If you click on the link that I have attached you will find the pictures and if you look in the lower right hand corner you will find the comment on each picture same as below.

#002 Center of the photo is a cast iron emblem of a deer with wings with the name of the company : Liang Service Co. in the Thai Language. Notice a lot of rust and front fender damage at the bottom.

#004 Notice the motorcycle mirrors welded to handle bars. Samlors came out with no mirrors. Man at the re-chroming shop did a great job of grinding them off and re-chroming handlebars. Brass figurine will be explained later.

#006 Looking down at the floorboard shows a lot of rot and damage.

#007 Scene hand painted on back of passenger seat is of the Bridge Over River Kwai. Hated to remove it but had to do repairs to the seat and removed 4 layers of old paint.

#008 Side view. Notice the blue roof was taped on with black electrical tape.

#009 Rear bumper was not damaged but had some rust on back side, needed re-chroming. The emblem in center of bumper is of the deer with wings again.

#011 Heavy duty springs and other parts in need of re-chroming.

#014 View of bottom of seat and main chassis leaning against the pole. I have no electric power tools so I used a pocket knife to strip the paint off the chassis along with steel wool.

#016 Loaded up and ready to go looking for bearings for axle, wheels, front forks, and pedal crank.

#019 Had to replace all bearings on samlor

#020 Rear axle chain sprocket about 50% worn. At present unable to find a new one but will keep looking. This one will still last a long time no more than it will be ridden.

#026 Springs disassembled and ready for chroming.

#027 Front fender damage repaired using a hammer and a round head bolt.

#029 Rear fender damage. Note: All fenders had been painted many times. Had to remove all paint again with a pocket knife and steel wool.

There may be a few more "before" photos added later.

#036 Here are two of the chassis decorative pieces that were rusted out and I couldn't find replacements so I made new ones. Old ones were made of steel and had been chromed. I purchased a piece of chromed brass sink drain pipe and took a hacksaw blade and a file and worked a week making new ones. There were four pieces in all. This was a hard job!

#040 Starting to reassemble after painting chassis and getting re chromed pieces back.

#042 Rear end assembled and waiting on passenger seat to be finished.

#046 Company logo after re chroming.

#047 Floorboard of passenger seat getting ready for polyurethane.

#048 Working on reassembly. Notice the grey primed passenger seat to my left ready for painting.

#051 These old pieces were the lip on the floorboard. Made of wood and covered with sheet metal. Wood was rotten. I replaced it all with stainless steel.

#053 Chain installed. All bearings on the samlor were replaced with new ones.

#055 Old seat held together with wire and string.

#056 Another view. This was the original seat and is over 30 years old.

#059 New seat, best bargain of the restoration project. Cost me $13.50 and was the last one in the shop. Real leather one-quarter inch thick. Lucky to find this!

#061 Solid brass figurine ornament. Very old and worn. Was on the samlor when I bought it, was added by previous owner. He wanted to remove it but I told him I wanted it and he decided to let me have it. This is truly an antique and a great conversation piece.

#062 More on the figurine: This brass figure is a character in the epic saga story of the Ramakien (Google it). His name is Ramasoon and is the " God of Thunder". Perfect for my samlor because I will probably be making a lot of thunder when I strain to pedal this heavy bike! LOL!

#085 Rear wheel fenders installed with new reflectors. Also installed the re chromed bumper. Paint job that I did on the seat came out looking good after a lot of compounding.

#086 Rear wheel hubcaps installed. I found these after a lot of searching in a lot of cities around Bangkok. Not many of these left in the country.

#091 Roof support tubes mounted. They are the five tubes you see on each side of the seat.

#097 Roof with the rain flaps rolled up. Notice the red bamboo slats that mount into the tubes to support the roof. They are the original slats that came from the factory when it was built. I repainted them.

#099 Samlors didn't come with headlights because they were used in the city areas where they had street lights. I live outside the village and decided to add two headlights(one on each side of the passenger seat) to be able to see at night if needed. I also installed two new tail lights under the back of the seat where two old lights were before.

#106 Ready to ride! Plan to ride around the village on the King Of Thailand's 84th Birthday to celebrate his birthday on Dec. 05. The whole village will celebrate with a big party and fireworks. LONG LIVE THE KING!!!

Well, my restoration project is almost completed. It is Dec.03 2011 and I have been working since Sept. 12 and all I have to do now is to clean and polish the samlor and I will be done. Many people have asked me what I plan to do with the samlor and my answer is that I will probably ride it around the village, go to the local market, use it to get a little exercise. Some people have asked me if I would sell it and I said that I would if the price is right, but I really would like to see it end up in a museum so people can remember a part of their heritage. I have spent a lot of time traveling around and looking for parts and looking at other samlors and talking to many samlor drivers. After seeing other samlors and the run-down condition that they were in, it made me feel proud to have taken on this project and to restore a part of Thai culture that is worthy enough to be in a museum. I have put a lot of hard work into this project and have enjoyed the time spent doing it.

I hope everyone of you will take the time to look at the pictures and read the comment that I have put on each one. If you have any questions please feel free to ask and if you have any comments I would love to hear them. Hope you enjoy and learn something from my project.

Peace be with you! 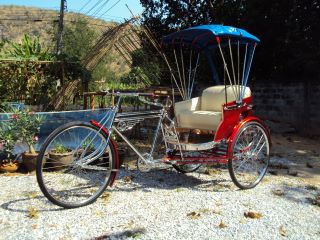 Jerry
Posted by Malcolm and Ciejay Burgess at 4:31 AM 26 comments: