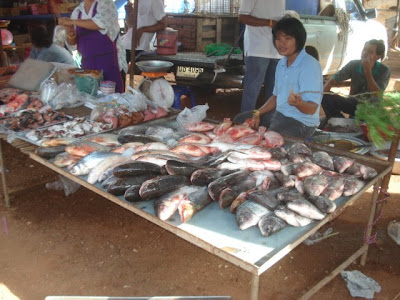 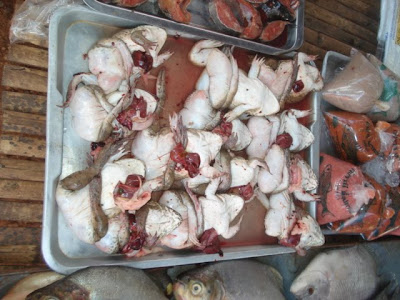 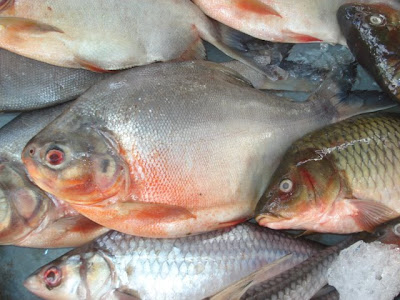 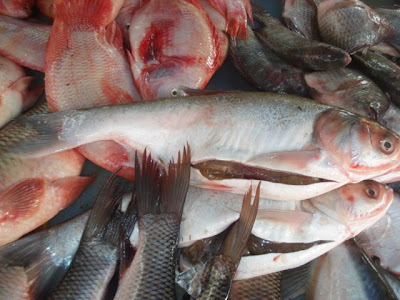 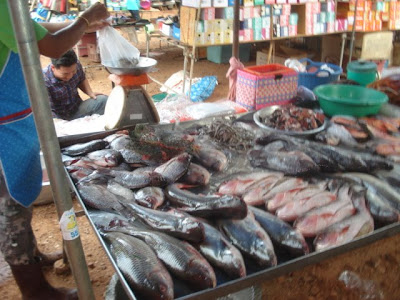 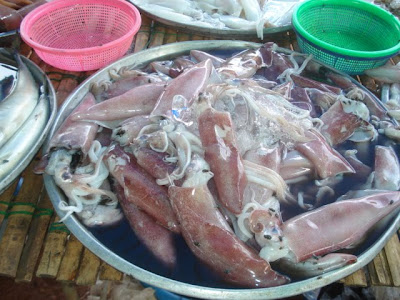 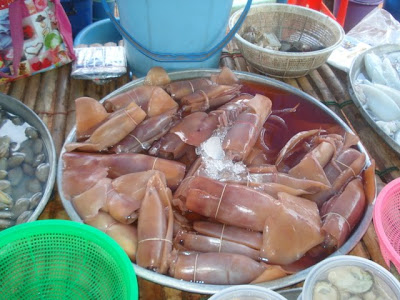 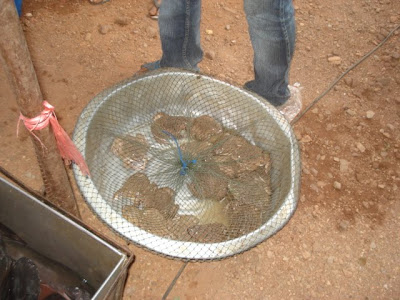 I've said it before and I'll say it again , "my favorite day of the week in the LOS is market day". there are soooo many reasons why I like market days soo much , I like getting to see everyone , the whole village and surrounding area comes out to buy their weeks supplies of fresh fruit and veggies and anything else you can think of that you might need to keep body and soul together and then some.I like for the folks to see the farang and see that he's still here after 10 years and not just a visitor. Right beside the market is a car wash and I can get the truck cleaned and detailed for 100 baht , and there is a great coffee shop there too and the lady always puts a scoop of chocolate ice cream in mine , yum yum . give it a try . The real reason I love the market is that everything is sooo fresh and I can pick what and how much I want with out it being wrapped in plastic saran wrap and stored in a cooler for several days and then put out as fresh , I can pick it up, and squeeze it , smell it, hand it to Ciejay for a look see and her professional, (ha ha ) approval or disapproval ,and even ask for a sample taste if I'm not to sure , and the person does it with a smile and not like I'm bothering her or him, like I have experienced in the store front markets .What a difference it makes when you are spending your money and the folks really appreciate you buying from their tent or little table , and you know you're not only getting fresh fruit and veggies , but you are helping this family , by buying the fruit of their labor .

But today was a special mission, we had company coming for dinner and I wanted to have a fish fry , soooo I was on the hunt for the freshest fish I could find, well I soon found out that there were sooo many different kind , and sizes, That I had to go back home and get Ciejay to come help me( that was a first as I always think of myself as the shopper King ), I never knew there was so many varieties of fish swimming up and down the River Kwai, and raised in all the little ponds in back of my neighbors houses.Well I picked a big Catfish to grill and Ciejay picked a Mud fish , to make Tum Yum Pla , we had a couple of Thai's coming too and she said they would like the Tum Yum , Sooo I said ok . Everyone had a great time , the Cat fish fry turned out great , I served it with grilled hot veggies and served on a chilled bed of lettuce , red and green, topped ,with my home made Italian dressing , baked potatoes with butter ,chives and sour cream and bacon bits and my very own corn hush puppies ( deep fried cornbread rolled into balls ) and served with home made cole slaw (South Carolina style ). The Thai guest jump right in and had heaping bowls of Tum Yum and a side dish of the famous Jasmine Rice (Thai guest are soo easy to cook for ).
Everyone seemed to enjoy themselves , and everyone keep say the were full , and Em sooo I guess it was a success.
I am always sooo glad for the fresh things we can get at our market that make it sooo much fun to cook and it (I hope) always taste soo good and fresh , especially the fresh fish , just caught this morning.
I'm posting a few pictures of all the fresh fish I had to chose from. I hope you have a fresh market near you and if possible , buy as much there as you can, the family farmers will love you for it, and you will be eating a lot fresher and healthier.
I'm glad I'm here in the LOS and that I have a wonderful person like Ciejay to share it with, I guess you could say I'm here, I'm happy,I'm blessed, and to top it all off I'm Retired in Thailand and Loving It .
Posted by Malcolm and Ciejay Burgess at 2:10 AM 2 comments: 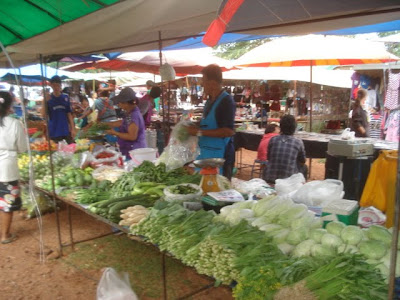 Most of these veggies were growing out behind his house just the day before , he has a huge garden. 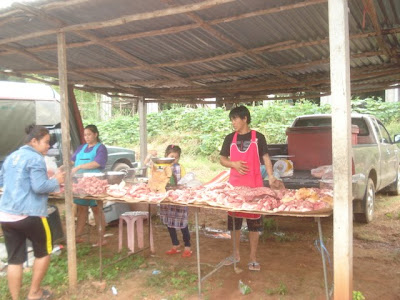 I swear this pork is so fresh , I thought I heard a loud squeal 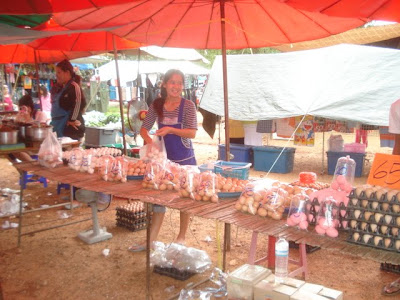 these eggs are so fresh that when they start to run low they run out to the truck where the hens are laying more on demand. 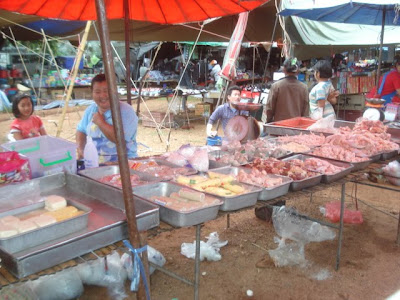 After all the eggs are laid they then are sold here , minus all their feathers of course 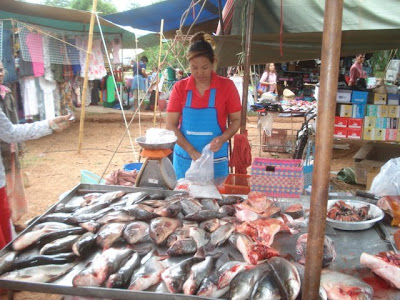 Believe it are not , but some of these fish are still flopping around on the table .

It's been a while since I posted anything about one of my favorite things to do here in Wang Pho , doing the weekly shopping at our fresh fruit and veggie market and oh ya I don't want to forget the fresh meat and fish market too
.
I can't wait for the net to get sooo advanced that we will have scratch and sniff available on all the pictures . The one great thing about the fresh market is all the wonderful smells all mixed together . I would be amiss if I forgot to mention that on market days there is also a lot of already cooked food vendors at the market about 25% of the market is fast (Thai style ) food to take home to eat. Ciejay and me talked about it one day and we both agreed that if we really wanted to we would never have to cook at home ever, and fresh cooked meals are within 5 minutes ride or walk from our home , something to think about as we get older , ha ha ..
Sorry no scratch and sniff , but hope you enjoy the pictures . Malcolm
Do you have a fresh fruit and veggie market near you and do you visit it often ????
We have a huge Tesco Lotus that we could buy our fruit and veggies if we wanted to , but not only are the local markets stuff fresher , it helps our local farmer to sell their stuff and get a little income from all their hard work and it also keeps our little town from being a poor village .
Posted by Malcolm and Ciejay Burgess at 10:31 PM 2 comments:

Posted by Malcolm and Ciejay Burgess at 1:04 AM 1 comment: