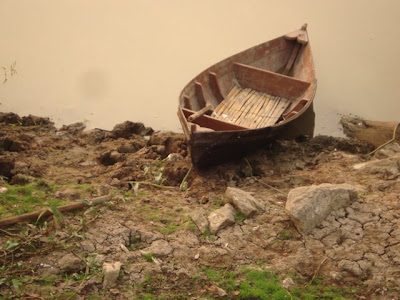 While on one of our visit to the small village where Ciejay grew up and raised her family , we went by the old homeplace that her younger brother and his wife live in now, and we were talking and I was listening to stories of the family and eleven people living in a bamboo hut that use to be there before the house that is there now.Before they put dams on the canal in front of the house ,the family use to take a boat to Wat Sing the local village to go to school and to do their shopping for all the necessities of life .The Tha- jeen river, ran all the way to Bangkok and meet up with the big river Jow Praya, that ran to Bangkok , and was the life line or connection, between many small villages before all the roads were built .Ciejay was telling stories of seeing a dead body float by one day on the way to school and how they would stop along the way to check the fish traps that Pa made out of bamboo in hopes of catching a fish for dinner that night and ,her brother would check the trap he had set in the rice field to see if he had caught a field rat ,that would make a good meal for the family.There was a story about the time they all decided to take a swim before rounding the bend near their house as the parents did not want them swimming in the river. Ciejay says that when they got out they were all covered with leeches and were the girls were crying and they had to go and have Ma get them off, of course Pa found out they were swimming in the river and that meant a couple swats with the ole bamboo rod in the corner ,just for that purpose. They had so many stories of their childhood,and they seemed (the stories) to have a bonding effect on them and the sweet childhood stories kept them close to each others hearts with fond memories. I loved hearing them and it brought me closer to Ciejay ,hearing about her as a child and some of the good times and hardships she had growing up, it has helped me to understand how she thinks ablut things , and how she will relate to certain situations even today. The highlight of the evening was when her Brother said "do you want to see the old boat we traveled in" of course I said" yes "and grabbed my camera for a shot of a rotten wooden boat on it side laying under the trees , but to my surprise there it was almost as good as new and Koom told me he still uses it to fish from and to cross the canal to visit sister Tui from time to time .I have learned so much about how Thailand use to be before all the western influence from Ciejay's little stories, and am writing down all the little stories for our Thai grand-son to give him when he grows up .I hope you hear lots of stories too and save them to pass on.If this generation does not preserve them they will be lost. Malcolm
Posted by Malcolm and Ciejay Burgess at 9:53 PM

Malcolm a nice story. Not sure I fancy a "field rat" though. Mind you I read a bit about them seing sold in Isaan.

Hi Malcolm, a touching reflection on childhood adventures and rightly keeping them alive. you of course are helping with this by publсshing them on this blog.

'Before Western influence' how many time do we hear that throughout the world. Good or bad, I think only expatriates from the west only really know the answer to that.

A field rate is always better then a Bangkok rat! Nice post Malcolm, it is good that your inlaws reminisce like they seem to do. Mine don't seem to talk all that much about the past (it was all good I have been assured) but occasionally I get snippets from my wife.

Mike , we were coming thru Nakon Sawan, and I saw rats (field ) being grilled and sold there and that is central thailand , I think they will all eat a rat given the opportunity. I am going to try a bite or two, next time just so I can brag that I did ha ha.
Martin I think western influnce HAS been good and bad , I just don't like the effect the T V and Western Movies are having on the young people, and Thai soaps Oh my god,terrible.
MeMOCK ,I have found that if you get them started talking about the past it can go on all night . and i ask Questions which they find amusing and are eager to answer , give it a try.
Thanks for the reads made my day. Malcolm

Having read a few snippets of your childhood years I can say with certainty that if you had been in Ciejays family then that bamboo rod would have swatted you from one week to the next. How you would have enjoyed swimming in the river and fishing in the boat, I've got a hankering that on your next trip there you might be planning a fishing jaunt out in the boat. You would have bitten them leeches off with your bare teeth, I just know you would of.