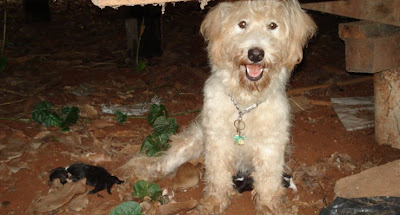 LOOK AT THAT SMILE 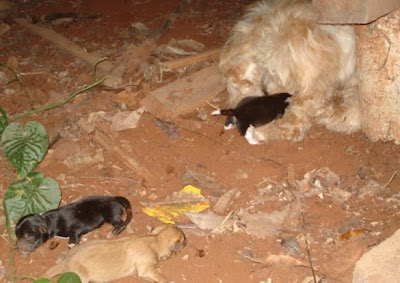 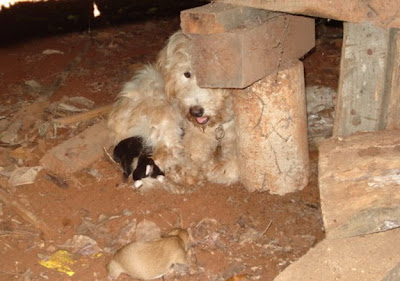 I'M COMING AS FAST AS I CAN

A couple months ago I looked out the window ,to see what I thought was a set of conjoined twin doggies in front of the house , so I grabbed my camera, and was off to get a photo that I was hopeing that I could sell to a couple of tabloids, but on closer observation ,I saw that it was just the neighbors dog Pooie, locked in LOVE with one of the Soi Boys (a big black one ) from down the street , after a little cooling off period they were separated , (without surgery), and Pooie ran down the street, as another one of her Soi Boys was waiting his turn (a small brown one ) they too ran to each other and fell into each others ("should I say ARMS")and they too,soon, became locked in love and looked to me like another set of conjoined twins. Separated,( again sucessfully with out surgery) soon this time ,the neighbor saw what was happening and locked her in the gate, and for a day or two, her Soi Boys could only look at her thru the fence , pretty soon they gave up and ran down the road ,because, my own dog, Smokey had gotten jealous of all the attention Pooie was getting and ,nature stirred inside her and down the road she went ,to meet up with the Soi Boys , now I am (glad or sad ) to say that in a very short time ,I will be a grand-pa .

The man we paid for the shot asured us that it would keep nature under control , but what man of us can control nature when a mind is made up (if you know what I mean).

Well , here it is 63 days later and I am happy to announce that Pooie is the proud Mother of three of the cutiest(they all are at this age ) puppies and I have seen ( in a week --ha ha )and as usual not a Father in sight. That too, is the nature of the male Thai dogs.The pictures are of Pooie and her beautiful babies. There are two black ones and one little brown one .

I will post pictures of Smokey ,the proud Mom, and the grand-kids when they make their appearance into our world. By the way ,I have to brag and say that Pooie and Smokey are two of the smartest dogs in the hood and ,if anyone needs a good house dog , let me know in a few weeks and I'll give you PICK OF THE LITTER . Malcolm

Posted by Malcolm and Ciejay Burgess at 9:33 PM

Malcolm it must be that time of the year since my neighbours dog, Jacks, is "with child" so to speak.
She too had the injection!

It was actually quite funny when she was playing the mating game since first up was Sitar, sad thing is he had his bits removed a while ago.

However clearly someone in the neighbourhood wasn't firing blanks.

Does that make me an Uncle, as Jacks owner always calls me Uncle Mike?????

Mike, yep !!!!! you're going to be a uncle, and they sell great treats for grand-kids and nephews and nieces at Tesco over in the pet dept. ha ha ha . Malcolm

Congrats Malcom, your a grandfather. Lovely story and look forward to more pictures my friend.

They are adorable...are you handing out cigars?

Thanks for the kind words and well wishes , and if you ever get over to Whang Pho not only will I pass out cigars , but we'll crack open a bottle of wine too.
And to save me ,as much as we try to keep the dogs clean and make a bed for them to have their puppies in ,as you can see in the photos ,Pooie had to have her's in the dirt and mud under the neighbors shed.

Malcolm as you know I adore dogs and this story and photos are right up my soi. Pooie and the kids look to be doing fine and I hope Smokeys progression into motherhood is nice and smooth. I'll look forward to some lovely snaps of proud Smokey and the 'Wang Pho Pups.'