BACK TO THE REAL WORLD (at least here in Whang Pho) 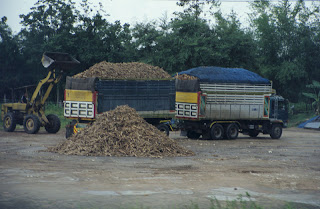 This picture is from the net and shows how they take the cassova to the market, it does nor bruise easy. 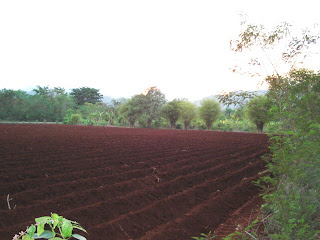 Take a look at that good dirt 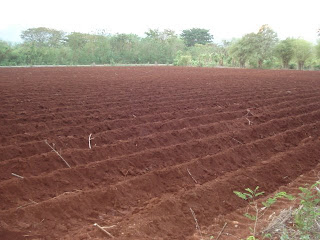 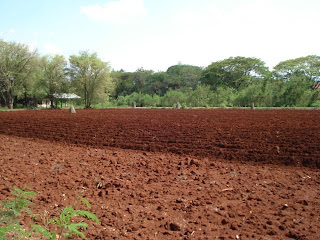 these fields look so good and the soil smells so fresh after just being plowed ,reminds me of my chilhood and visting Grand-pa's farm 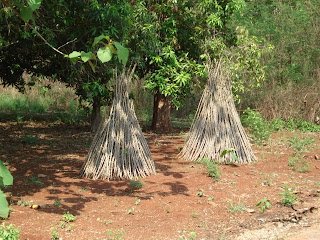 they put the stalks here for a month or two and they come to life , they cut them into pieces 6 to 8 inches long and stick them in the ground and kazam with the first rain they take off. 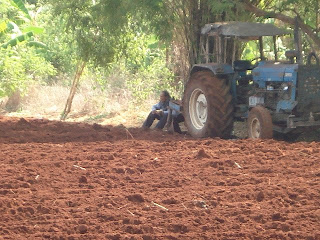 Well Songkran has come and gone and everyone is happy and friends again, the stuff in the Big City has calmed down , at least for the time being , so I don't have to have my soaps interrupted with updates from the one sided media. Life can now get back to what I call normal here in my little corner of the world I call paradise.
It's almost the rainy season here and folks are getting the soil and land ready for their cash crops that will feed and clothe their families for another year . We have several cash crops that grow well here in our valley, cassova, pineapple, sugar cane , and corn. Lots of other veggies and fruit, grow here as well as this valley is very fertile .
The one in the pictures about to be planted by my neighbor is cassova, easy to plant , and a once a year crop that needs very little water or attention once it gets a good start from the rain fall.
I read somewhere that a lot of countries that need to import a lot of their food are now buying Thailand's cassova instead of potatoes as the potatoes will rot in a few weeks and even quicker than that if they get damp , where as the cassova will last a lot longer and not as effected as much by the dampness. I have been using the cassova in my vegetable soup and it adds a good taste and in fact I can't tell a lot of difference in it and potatoes when cooked with other veggies. Do you have cassova growing where you live? Have you ever had it to eat? And what did you think of the taste and texture.
I just found a picture on the net and it said that cassova is easy to transport as it can take a beating and keep on ticking . Malcolm
What is the main cash crops in your local area? I know that you can grow lots of stuff ,but one crop seems to stand out as a money maker for the locals .

Posted by Malcolm and Ciejay Burgess at 6:54 AM

Not seen it grown here or at least i don't think so. Plenty of sweet potato and other veggies though.

Hi Malcolm and CieJay,
I've not heard of this before but it sounds like it has a lot of potential on the earning front for your neighbour. the joy of a freshly ploughed field. the soil looked very fertile there.
Glad you're drying out ready to get wet again in the rainy season.
Take Care

There is a stark difference here compared to your last post. The water filled fun of Songkran to the ploughing and planting of fields to produce food and the necessary money needed to survive. I had to Google search cassova and it turns out to be the third largest carbohydrate source found in human foods, Africa being the biggest producer. Tapioca is made from the roots of the plant. Wilai's village is all rice fields with a very small plot of sweet potatoes near the river.

Never heard of Cassova-but so interesting seeing how the soil and gardens look there.

What a great web log. I spend hours on the net reading blogs, about tons of various subjects. I have to first of all give praise to whoever created your theme and second of all to you for writing what i can only describe as an fabulous article. I honestly believe there is a skill to writing articles that only very few posses and honestly you got it. The combining of demonstrative and upper-class content is by all odds super rare with the astronomic amount of blogs on the cyberspace.